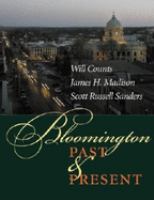 "Good places are shaped by the gifts of nature and by the labor and love of many people over generations. The city of Bloomington, tucked away in the forested hills of southern Indiana, is one such place. Three of us who have worked here, played here, reared children here, and set our roots right down to the limestone bedrock made this book to chronicle and celebrate our home town."

Thus begins Bloomington Past and Present, a volume that anyone who has lived in--or even just passed through--this memorable city will want to have and pass down to future generations of Bloomingtonians.

Photojournalist Will Counts gathered some of his own photographs taken over a long career, along with photographs by more than a dozen other fine artists. Some drawn from archives, some taken recently, these images capture the city's people and places.

The essay "Loving This Place" by Scott Russell Sanders leads the reader on a walk through Bloomington today, evoking the feel of the city, its human fabric and natural setting. In "Old Times and New Times in Bloomington," James H. Madison writes about what Bloomington once was, tracing changes in the community from the 19th century on through today's complex and vibrant civic scene.

"Across from the fire station and post office rises the limestone mass of First Methodist, the grandest of our churches, one known for fine music and powerful preaching. In general, as you move west from here to the far fringes of Bloomington, the preaching becomes hotter and hotter, ranging from Baptists and African Methodist Episcopalians on through various brands of evangelicals, apostolics, and Pentecostals; and as you move east from here the preaching generally becomes cooler, ranging from Presbyterians and Episcopalians, through Catholics and Lutherans, on out to the Quakers, who keep their silence."
--Scott Russell Sanders

"There were Bloomington residents at the beginning of the twenty-first century who had heard the Metropolitan Opera perform Aida in the University Auditorium in 1942; given their sex histories to Alfred Kinsey in the 1940s; subjected their teeth to the stannous fluoride tests that produced Crest toothpaste in the early 1950s; listened to Gene McCarthy and Bobby Kennedy explain why the Vietnam War was wrong in 1968; heard not only Elvis but also Bill Monroe, the Supremes, and Ray Charles; participated eagerly in a new curbside recycling program begun in the early 1990s; bought sushi and tofu at the grocery store; and listened to the Dalai Lama more than once. The small town in southern Indiana was hardly isolated or ordinary."
--James H. Madison

Alternative Title: Bloomington, past and present

There are no comments for this title yet.

There are no ages for this title yet.

There are no summaries for this title yet.

There are no quotes for this title yet.

Loading...
No similar edition of this title was found at CCPL.

Try searching for Bloomington, Past & Present to see if CCPL owns related versions of the work.