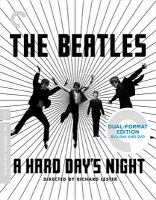 Captures all the fun, excitement, and unforgettable music of John, Paul, George, and Ringo at the height of Beatlemania. The Beatles perform their songs and look for adventure, all while avoiding hordes of screaming fans. Packed with all-time Beatle favorites, including A Hard Day's Night; All My Loving; Can't Buy Me Love; I Should Have Known Better; She Loves You; Tell Me Why; and more.
Publisher: [Irvington, NY] : The Criterion Collection, [2014]
Edition: Dual format edition, DVD
ISBN: 9781604658453
1604658452

This is a perfect depiction of Beatlemania. The screaming fans juxtaposed with the chaotic schedule. This is was the perfect vehicle to launch the Beatles into superstardom. Released only months after their "invasion" of America, this film cemented the Beatles as the ultimate pop music phenomenon.

"A Hard Day's Night" was written by Alun Owen, and directed by Richard Lester. It was released in 1964, at the height of Beatlemania. The documentary-style film chronicles the Beatles arriving at a theater, rehearsing, and performing in a BBC television special. At one point, the Beatles hold a press conference. Reporter: "How did you find America?" John: "Turn left at Greenland." Reporter: "Are you a mod or a rocker?" Ringo: "I'm a mocker." Reporter: "What would you call that hairstyle you're wearing?" George: "Arthur." Reporter: "Do you often see your father?" Paul: "No, actually, we're just good friends." Musically speaking, Ringo may have been overshadowed by John, Paul and George. In this movie, once Ringo steps out from behind his drum kit, he steals the show from the other Beatles!

Extras:
- Three audio options: a monaural soundtrack; newly created stereo; a 5.1 surround mix.
- Audio commentary featuring cast and crew.
- In Their Own Voices: Combines 1964 Beatles interviews with behind the scenes footage and photos.
- You Can't Do That: The Making of A Hard Days Night, a 1994 documentary by producer Walter Shenson including an outtake performance by the Beatles.
- Trailers.

The first Beatles movie still holds up fairly well. You might want to use closed captioning to catch all the dialogue. Look for a young Phil Collins as "Seated Fan with Necktie". A tiny bit of trivia: this was the 1st movie released on CD-ROM. No mad scientists or cults chasing Ringo in this one, this has more of a "day in the life" feel to it. And of course a lot of great songs.

I absolutely love this movie - John is by far the funniest in the film (hehe john playing with toys in the bath scene). Every one of the boys gets at least one funny part, which I love, and it's one of those movies that makes me excited every time I watch it. Part of its charm is that the film is in b&w.

What's more a fun day with the Beatles - and John Lennon's wit, as opposed to the arthouse musical piece that critics hail, the film is not without its charms. However, most of them have to do with when they break into song, giving the audience more a feel of simply watching a very long music video, something to which director Richard Lester has been credited as a major influence. With that said, it fits quite well into the feel of the swinging 60s film genre, to which Lester was a contributor.

This flick went to great lengths to present The Beatles as being "just-a-fun-bunch-of-guys". I found The Beatles' overall wholesomeness to be just a little too contrived, and cute, for my liking.

The highlight of A.H.D.N. was, without a doubt, all of the "Beatle-Hysteria" that got churned up wherever The Fab 4 went. The rabid Beatle-fans never, ever seemed to tire of running, and screaming, like crazed lunatics, after The Beatles day, or night. It was all so very frightening and comical, both, at the same time.

Many people consider movies in black and white to be aged and somewhat bland, but these false accusations couldn't be further from the truth when considering "A Hard Day's Night," possibly the best movie that The Beatles had ever released. This timeless comedy was a haven for screaming fans and is nowadays, a shining example of the standards movies used to pursue. If you enjoy the music of the '60s, I would definitely recommend this movie to you- as it managed to complete the dreaded task of combining music videos into different media forms whilst still keeping the audience engaged. Although the movie isn't thought of in a sense of brilliance, I would still consider it a classic despite the movie's silliness. In fact, back when The Beatles were on every street corner, it went without saying just how treasured "A Hard Day's Night" had been- and I believe that it still is to this date, even if people need a reminder. The Beatles were considered legends at the time of its release and were pushing creative boundaries to pursue the vision they had for "A Hard Day's Night," thus resulting in equal parts of showmanship from John, brilliance from Paul, precision from George and goofiness from Ringo. In short, "A Hard Day's Night" has earned itself a place in every household and is a movie that I fondly enjoy- 6/5! @showmethemonet! of the Hamilton Public Library Teen Review Board

" Who's that little old man???" "He's very clean." During the filming of this phenomenon of a black and white film, George met his future wife, who was dressed as one of a few schoolgirls in a compartment on a train, as the Beatles are passing through,as well as, looking in. She was already semi-famous, as she was a sought after model. She's alright; that is if you like blondes. When later George became involved in Hinduism, she kept up with him; she was a serious student, with the advantage of not getting as deep into the drugs they were simultaneously using ( I know, that does not sound as if they were seriously being religious, or spiritual, but they were super-rich, and very much looked up to by the young people of the time. These actually fortunate factors served to inflate, rather than deflate, their egos.Which, of course, was not so fortunate. As i say, she handled all of this "ALL TOO MUCH," better than did George.) The film is a classic: though not a documentary, it is set up as one, so there is a lot of frenetic activity which was actually a part of the BEATLEMANIA of the era. Being in black and white appears to lend a sense of genuineness to HARD DAY'S NIGHT.

The extra features includes documentaries with a lot of details on the history of the Beatles that I haven't seen before.

John: *playing with submarine toys in the bath, singing in German*

George: *teaching Shake how to shave* "put your tongue away, it looks disgusting hanging out -all pink."
John: "AH!" *sinks under bubbles*
George: *Looking at John* "Torpedoed again, eh?"

Reporter: "How did you find America?" John: "Turned left at Greenland."

Reporter: "What would you call that hairstyle you're wearing?" George: "Arthur."

Ringo: "I don't snore." George: "You do. Repeatedly." Ringo: "Do I snore, John?" John: "Yeah, you're a window rattler, son." Ringo: "That's just your opinion. Do I snore, Paul?" Paul: "With a trombone hooter like yours, it would be unnatural if you didn't." Grandfather: "Now, Paulie... don't mock the afflicted." Paul: "Ah, come off it. It's only a joke!" Grandfather: "Aye, it may be a joke to you, but it's his nose. He can't help havin' a hideous great hooter! And his poor little head, tremblin' under the weight of it!"

Grandfather: "It's your nose, you know. Fans are funny that way, they take a dislike to things. They'll pick on a nose." Ringo: "Aw, you pick on your own."

Extras:
- Three audio options: a monaural soundtrack; newly created stereo; a 5.1 surround mix.
- Audio commentary featuring cast and crew.
- In Their Own Voices: Combines 1964 Beatles interviews with behind the scenes footage and photos.
- You Can't Do That: The Making of A Hard Days Night, a 1994 documentary by producer Walter Shenson including an outtake performance by the Beatles.
- Trailers.

There are no ages for this title yet.

Find it at CCPL