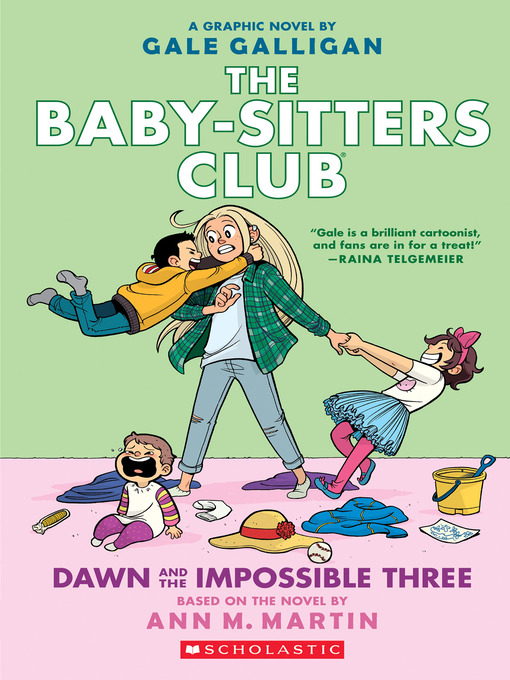 Dawn and the Impossible Three

Dawn Schafer is the newest member of The Baby-sitters Club. While she's still adjusting to life in Stoneybrook after moving from sunny California, she's eager to accept her first big job. But taking care of the three Barrett kids would be too much for any baby-sitter. The house is always a mess, the kids are out of control, and Mrs. Barrett never does any of the things she promises. On top of all that, Dawn wants to fit in with the other members of the BSC, but she can't figure out how to get along with Kristy. Was joining The Baby-sitters Club a mistake?
Publisher: Scholastic Inc.

STPLKidsCauseway thinks this title is suitable for 8 years and over

navy_panda_622 thinks this title is suitable for 10 years and over

pink_deer_372 thinks this title is suitable for 7 years and over

pink_dolphin_2738 thinks this title is suitable for All Ages

red_bee_796 thinks this title is suitable for 10 years and over

black_rabbit_207 thinks this title is suitable for All Ages

mandykittie thinks this title is suitable for 9 years and over

lizzie66 thinks this title is suitable for All Ages

The Baby-Sitters Club: Dawn and the Impossible Three (a graphic novel) is the 5th book in the popular series. This book features a new character, Dawn, who is also the main character of the book. She was introduced at the end of the fourth book when she moved to a new town. I love the idea the author had to have every book of the series written in a different perspective. This means we get to enter the lives of all the members of the baby-sitters club. Getting back to the 5th story, Dawn and the impossible three mainly concentrates on the problems Dawn has about being new in Stoney Brook, and especially the struggles she has with babysitting.

The main characters in this story are all the girls in the club. Stacey and Kristy are introduced, and their other friends, Mary-Anne and Claudia. And of course, there are secondary characters, such as kids the girls sit for, as well as their parents. Thanks to the well-drawn pictures, readers get a good idea of the characters’ physical traits. And based on certain things characters say, and the way they describe each other, the readers get to learn a lot about them. Summarizing the paragraph, the author did a great job on explaining the characters’ physical and personality traits.

This book I’m reviewing takes place during the freezing winter in Stoney Brook, Connecticut. Reading the novel, you’ll get to know more about this small town.

To be honest, I’m not really into babysitting, and that sort of stuff. But, I still enjoyed this book, and it captured my interest. Even though the whole series is mainly about babysitting, it does concern other matters. And either way, this graphic novel had amazing pictures, well-explained characters, time, & setting, entertainment and creativity.

Of course, I would strongly recommend this book and this series for tweens and teens who are interested in babysitting. But I think that those who aren’t too interested in that topic will enjoy it almost as much. It is a novel worth reading.

Love all these books need more !! Love this one too

Teaches single parents to spend more time with their kids. And to help their kids in dificelt times like divorce.

where I found out she came out with another book I was soooo excited all her books are amazing. :)

Good! Not the same as RTs ilustrastions but it was still good.

I love this book. Dawn is so responsible and tough, through everything. I also like Mallory. Dawn is really helping the Barrets out, and that was really courage-full of her to step up to Ms.Barret.

I enjoyed how this story really focuses on dawn dealing with a new sitting job as well as the client's single mom. It was wonderful to see the mom finally take some action to be a better parent to her children all in all a very amazing an lovely story to have read.

Dawn has just joined the baby sitters club, but she's still having trouble fitting in at her new school! Plus, it doesn't' seem like Kristy really wants to be friends! So when a single mom needs major help at home, Dawn decides its finally her time to shine! Unfortunately, Ms. Barret is very disorganized and forgetful, and between a major incident with Buddy Barret, Dawn seems to have bitten off more than she can chew...

There are no quotes for this title yet.

Find it at CCPL